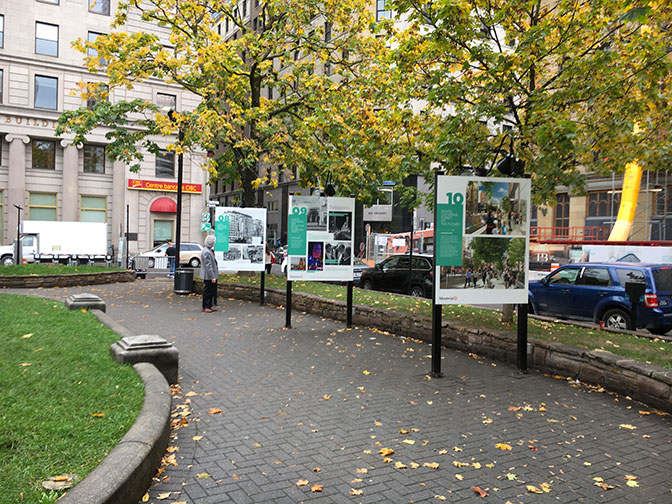 A symbol of the arrival of the first department stores Quebec's metropolis, Square Philips is located on Sainte-Catherine Street, one of the city's most vibrant streets. Surrounded by such emblematic stores as Birks and The Bay, the Square is easily recognizable thanks to the large statue of Edward VII, erected at the beginning of the last century.
In recent weeks, Place du Square Philips has been enlivened by an important cultural project: the enhancement of the city's historical heritage. Indeed, Sainte-Catherine Street has been one of Montreal's most commercial and tourist-oriented streets for many reasons. That is why its evolution through the years is worthy of more attention. This is exactly the mission that Cyclone Design Communications has embraced with the development of an outdoor exhibition.
Amélie Fleurant, a graphic designer at Cyclone Design, has developed an original, clear and eye-catching visual identity for this project, while remaining consistent with the municipality's graphic image. In addition to doing all the iconographic research and choosing the panel structures, CDC was responsible for creating a complete graphic grid for each panel, combining text, computer graphics, as well as selecting current and period photographs.
This permanent exhibition will remain in place for three years and is already on display throughout Square Philips! In 10 steps, the informative panels, printed by Optimum Graphics, retrace the key points of Sainte-Catherine Street?its evolution over the years?from its construction to the present day. What a great opportunity to discover more about our city while walking down its most dynamic street!